"The Winter King" by Christine Cohen 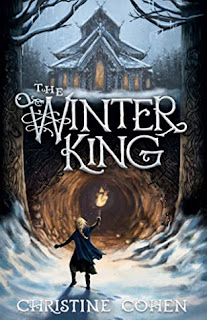 Wow.  This book hit me a lot harder than I was expecting.  I went into it thinking, "Okay, a fantasy winter story for early teens could be fun" and came out thinking, "That was so intense and illuminating!"

Cora's family has fallen into hard times ever since her father died while ice fishing.  Shunned by many villagers who think they're cursed, Cora's widowed mother and her three siblings struggle for basic necessities like food and socks.

The village is watched over by a remote deity called the Winter King.  Cora blames him for her father's death and her family's struggles.  When a coughing sickness strikes the village, Cora becomes determined to confront the Winter King.  When she finally does, she learns more than she could have ever expected and brings true peace not only to her own heart, but to the lives of her whole village.

This book started a little slowly, but it built steadily until I was totally gripped by Cora's fight to find a way to save her family and understand her god.  It can be read as an allegory for the Protestant Reformation, with sacred texts and the truth they hold being withheld from the common people, but also as simply a coming-of-age story of a determined young woman trying to make sense of her world with too little guidance.  I'm labeling it as Christian fiction, but it's not overtly Christian, only allegorically so.

Oh, and before you start comparing the "coughing sickness" to Covid-19 too strongly -- this book was published in 2019, before the virus was in our public consciousness here in the US.  So that's totally a coincidence.

If This was a Movie, I Would Rate It: PG-13 for a man who presses his attentions on a woman he has power over, some scary moments with monsters, descriptions of death, and a few kisses between young adults.  No bad language, no racy content, no gory violence.

This is my 14th book read from my TBR shelves for #TheUnreadShelfProject2021.