Does your public library hold used book sales?  Ours has about four a year.  Today, the kids and I spent about half an hour there.  This is what we bought: 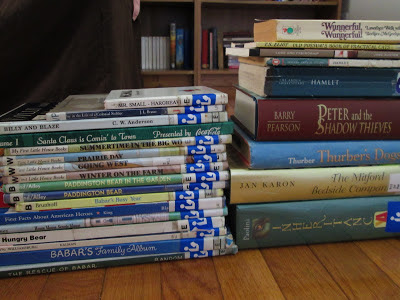 The total cost?  Fourteen dollars.  For basically the price of one new book, we got all these.  A couple are like new, donated to the library by nice people like us.  Most are "retired" library books with some wear and tear.  But still!  Lots and lots of books for the kids and for me, and we supported our library at the same time.

This is how I manage to fill my house with books and still feed my kids nutritious and healthy food :-)
Posted by Hamlette (Rachel) at 6:32 PM 11 comments:
Email ThisBlogThis!Share to TwitterShare to FacebookShare to Pinterest
Labels: Buying Books 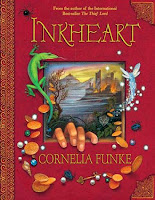 I first heard of this book when they made a movie version in 2008 -- my friend ED was super excited about it because she loved the book.  But it wasn't until The Book Chewers selected it to be their first Book of the Month that I finally got it out of the library and read it.

I suppose a quick synopsis would be in order, so I'll get that out of the way first.  Meggie's father, Mo, repairs books.  Her mother disappeared when Meggie was three, and we learn that she was actually sucked into a book in exchange for a book character coming to our world.  Mo can read people and things out of books, you see, though he never does so again after losing his wife.  But then some very nasty characters from a book called Inkheart come knocking, Mo and Meggie go on the run to evade them, and it's all a series of captures and escapes from there on.

I'm going to be very honest here:  I did not love Inkheart.  I liked it well enough to finish it, and I'm glad that I did, as I liked the last hundred pages or so the best of all.  But I just didn't love the book as a whole.

Why?  It's well-written, it's imaginative and original, it's got a suspenseful plot, it even has a sad and lonely character.  So why didn't I like it more than I did?

I could almost fall in love with Dustfinger, though.  He's sad and lonely, he's got the unrequited love thing going on, and he's very sweet.  But he's also not helpful, and unhelpfulness guarantees that I won't love a character.  So I only like him.

But Meggie, Mo, Elinor, and Fenoglio... nope, don't like them much.  And it really boils down to the fact that Meggie wants to be able to read people out of books like Mo can.  Even after she's seen how much sorrow it causes, lost her own mother this way, seen how very unhappy Dustfinger is being stuck in a world that's not his own... still, she wants to be able to do it too.  I found that very mean and selfish, to be honest.  Mo I do like better, as he didn't know what consequences his ability could have until people started appearing and disappearing.  And Elinor is helpful in her own way, and very generous at the end, so I like her okay.  But Fenoglio is too vain and bossy.

So.  Is this a bad book?  Nope.  Would I recommend it?  Yup, if you like YA adventure and fantasy.  And I still intend to see the movie, as it has Brendan Fraser (yum!), Paul Bettany (aww!), and Andy Serkis (woo!) in it.

If this was a movie, I would rate it:  PG-13 for violence and disturbing images.
Posted by Hamlette (Rachel) at 9:03 AM 15 comments:
Email ThisBlogThis!Share to TwitterShare to FacebookShare to Pinterest
Labels: Adventure, Fantasy, Young Adult

Remember when I re-read Pride and Prejudice only a few months after my previous reading, and I said it was a very different experience?  I was able to look at it more from the standpoint of a writer rather than reading strictly for enjoyment, and I learned a few things from it I wouldn't have otherwise.

When my husband read my post about that experience, he asked me if I'd ever re-read any other books close together like that.  And I realized I really haven't.  Oh, I've occasionally read a book over again as soon as I'd finished it for the first time, just because I didn't want to leave that world and my new-found friends there.  I know I did that with The Guernsey Literary and Potato Peel Pie Society, and I used to do it more often when I was younger and had more time to read. 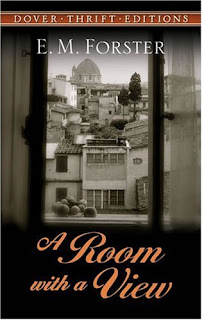 So when I got my own copy of A Room with a View from my mom as a birthday present, I decided to read it again right away, to see if once again, as second reading in quick succession led to some new revelations.  Plus, there's a revelation on the very last page of the book that completely changes your view of one of the characters (I won't spoil it further), and I wanted to see if that revelation really did make the character's actions seem different all through the book.  (Kind of like how I wanted to re-see The Sixth Sense right away to see if the main character's back was ever visible through the rest of the movie.)  And not only did that character's actions make a completely different kind of sense this time through, but I definitely had a different reading experience than I did the first time.

For one thing, I didn't laugh as much as I did the first time.  I tend to laugh at surprising or delighting things, absurdities, and characters behaving so very much like themselves that they amuse me.  The latter only works when I already thoroughly know a character, which is part of why I love a lot of series so much.  Because I have this desire to imaginarily befriend characters, the more time I get to spend with them the better I get to know them, and the happier I am.

Okay, to get back on track here, I also really picked up on Forster's emphasis between dark and light this time.  When Lucy is trying to convince herself to marry Cecil, it says, "She disliked confidences, for they might lead to self-knowledge and to that king of terrors -- Light"  (p. 158).  Later, when Lucy comes to understand herself, it says, "the darkness was withdrawn, veil after veil, and she saw to the bottom of her soul" (p. 167).  It seems this "darkness" represents, not evil, but more like self-delusion, despair, ignorance.  Light, by contrast, then represents self-knowledge, hope, truth.  If you pay attention to when Forster mentions either light or dark in relation to a specific character, even if one of them is standing in a shadow or the sunlight, you can better understand what he's saying about that character's attitudes and beliefs.  I should really re-read it a third time and mark all the instances, because I didn't really notice this theme until about halfway through the book.

And finally, I just absolutely fell in love with Freddy Honeychurch this time around.  He's so very genuine and boyish and real.  Last time, I kept expecting him to get annoying, and kind of reserved my affection in fear of such an event.  Not so this read-through.  I think he may actually become my favorite character of all.

Okay, that's enough rambling.  I have a head cold and have taken a decongestant, which always discombobulate me, and I'm actually not sure this will make any sense whatsoever to anyone else.  Oh well.  Onward and upward!

On the cornice of the wardrobe, the hand of an amateur had painted this inscription:  "Mistrust all enterprises that require new clothes" (p. 102).

The armour of falsehood is subtly wrought out of darkness, and hides a man not only from others, but from his own soul (p. 132).

If this was a movie, I would rate it:  PG for a bunch of grown men skinny dipping in a pond and getting caught.
Posted by Hamlette (Rachel) at 4:42 PM 2 comments:
Email ThisBlogThis!Share to TwitterShare to FacebookShare to Pinterest
Labels: Classics, Coming of Age, Published 1900-1929, Reread, Romantic Love

Which Austen Character Am I?

I took this quiz five years ago, and came up Elinor Dashwood.  While I do feel I have a lot in common with Elinor, I've never really been satisfied with the answer.  Why?  Because I think I'm really more like Anne Elliot.  That's part of why Persuasion is my favorite Jane Austen novel -- I see so much of myself in Anne and relate to her more than to any of Austen's other heroines, much more so than to Elinor.  So I decided to retake the quiz, to see if my answer has changed at all.  To my great delight, I turned up as Anne this time!  Huzzah!  And I did not try to skew the answers, I promise.  I even passed over a couple that I knew would lead to her, just because they weren't how I truly would answer. 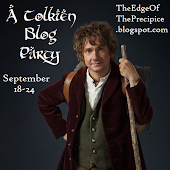 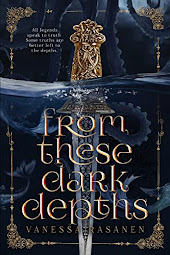