"Harry Potter and the Chamber of Secrets" by J. K. Rowling 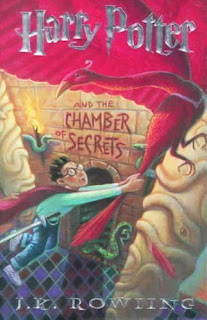 My Year with Harry Potter continues rolling delightfully along!  I basically inhaled The Chamber of Secrets in three days.  I just kept sneaking off to read it whenever I had a few minutes, and that's such a delightful way to live :-)

My plan for this year is to make myself read at least two books between each installment of the Harry Potter series so that I won't just smush them all together in my head.  And to make their joy last longer.  I do love to savor things I particularly enjoy.  And I love to anticipate things -- sometimes the anticipation can be as pleasurable as the actual experience or even itself, to be honest.  So I simply cannot pick up the next book (which is my favorite) until I finish a cople of the books I have going right now, and that is kind of killing me... but also, I'm loving how much I am looking forward to it!

I find this book SO MUCH BETTER than the first one, which I reviewed here a couple weeks ago.  Of course, it helps that we don't have to spend as much time explaining the wizarding world, though Rowling deftly catches any potential new (or forgetful) readers up to speed on things like Quidditch and the Sorting Hat and why everyone's so scared of Voldemort.  But overall, the pacing in this second book is so much tighter than in the first one.  The mystery about the Chamber of Secrets gets rolling quickly, and the book's tension builds so beautifully to the very thrilling climax.  Having high human stakes for Harry to fight to protect was extremely effective.

Once again, we have characters learning to be kind to people who are different from them, how to be a good friend instead of a wishy-washy one, and how to treat those who some would say are inferior to you.  A huge theme here is the importance of actions versus words.  Good or bad intentions are not as important or as powerful as good or bad behavior.

Also, Dobby makes me laugh a lot.  The whole book does.  Wonderful stuff.

And Mrs. Weasley is #MomGoals.

Mrs. Weasley was marching across the yard, scattering chickens, and for a short, plump, kind-faced woman, it was remarkable how much she looked like a saber-toothed tiger (p. 32).

"It is our choices, Harry, that show what we truly are, far more than our abilities" (p. 333). (I know that gets quoted a lot, but It's Just So True I Must Mention It.)

If This was a Movie, I Would Rate It: PG for some rude humor, children in danger, and a pretty creepy gathering of ghosts.