"For the Sake of the Game" edited by Laurie R. King and Leslie S. Klinger 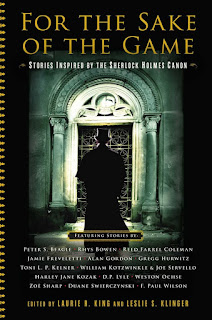 Hmm.  While this book was a fun, fast read, I didn't enjoy it quite as much as the earlier collections in this series, A Study in Sherlock, In the Company of Sherlock Holmes, and Echoes of Sherlock Holmes.  Like those first three, this is a collection of short stories somehow inspired by the Sherlock Holmes canon, by a very varied group of writers.  Some stories have Holmes and Watson in them, some don't, etc.

I think that a lot of the stories in this collection were less charming and quirky, and more edgy, and that's why I didn't like it as well.  I don't know, it just felt... colder and darker, somehow.  Instead of five favorite stories in it, I only have three:

+ "The Case of the Missing Case" by Alan Gordon, which has a young Sherlock Holmes learning some lessons from a master of disguise and putting his already formidable talents to work.

+ "The Adventure of the Six Sherlocks" by Toni L. P. Kelner, in which a murder at a Sherlock Holmes fan convention gets solved by a reporter and her unexpected sidekick.

+ "Hounded" by Zoe Sharp, which retells The Hound of the Baskervilles in the modern era and inserts an extra character into it, with some surprising results.

If This was a Movie, I Would Rate It: PG-13/R -- some stories are decidedly on the R side, with others being much tamer and cleaner.

This is my 4th book read from my TBR shelves for #TheUnreadShelfProject2021.