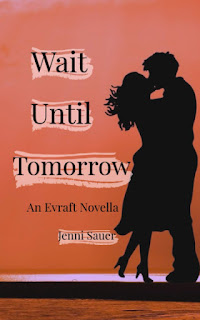 The Steadfast Tin Soldier and Rapunzel are two of my favorite fairy tales.  So a novella by Jenni Sauer that melds the two, set in the same universe as Rook di Goo and Yesterday or Long Ago?  Totally my jam.

Rue is what would have been called a "taxi dancer" a hundred years ago, here on earth.  She works at a disreputable dance hall, paid to dance with the men who frequent it.  Rue is an orphan, alone in the big city, exactly the sort of helpless young woman that others prey on.  She doesn't like being pawed at by an endless stream of bad dancers, but it's better than working Upstairs.  Just what the Upstairs girls do is never specified, but it doesn't have to be.

When Rue is attacked in the alley behind the dance hall, Inspector "Robbie" Robrecht investigates the crime, but he seems more interested in talking to Rue than in the hopeless impossibility of finding an unknown assailant in a city full of strangers.  Gently, gradually, Robbie and Rue get to know each other.  But when Rue's employer decides to give her to the dance hall's bouncer instead of moving her Upstairs, Rue runs.  And Robbie follows, hampered by his prosthetic leg, but faithful and determined.

I love that I can trust Sauer to deliver a happy, hopeful ending.  Although the original Steadfast Tin Soldier ends with fire and death, the author finds a logical way to subvert those that leaves me with a satisfied smile.

If This was a Movie, I Would Rate It: PG for inexplicit mentions of men's hands roving over a woman, a frightening attack, lots of chasing and danger, and a pretty scary ending.  Nothing actually objectionable, but not really something for elementary school kids either.

This is my 29th book read off my TBR shelves for #TheUnreadShelfProject2021.