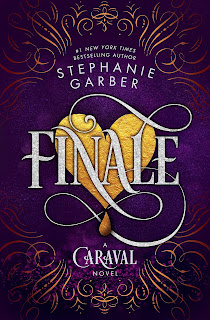 Well, I finished the trilogy.  This last book was approximately 400 pages of "this keeps getting worse and worse and worse," 10 pages of "maybe this will be okay," 1 page of "this is superb and I adore it and I'm going to read this page three times in a row," and 50 pages of "whew."  Now you know.

I did like Tella better by the end of this last book.  About as much I liked Scarlett to begin with, actually.  So that was cool.  Dante is still my favorite, though, even after all of this.

I will say that although Garber's shiny, sparkly, edgy descriptions entranced me throughout Caraval, by the middle of this book I was getting tired of everything being described as sharp, smoky, black, or floaty.  Hmm.

The way it all wrapped up was very, very satisfying, so I AM glad I've read these.  But I doubt I'll ever reread them.  Not for a very, very long time, anyway.  I don't feel pulled to go buy my own copies.

So... now I feel like I'm a cool kid because I finally read one of those YA fanasy series with the swirly words on the cover that everyone is always hyped up about.  I'm not particularly inspired to try out any other such series, but this was a fun ride.

And man, I'm just craving a good real-world-based mystery right now.  So much.  I will probably grab a Rex Stout novel and inhale it over the next day or two because... all I'm reading right now is fantasy?  Which is weird?  I'm like two-thirds of the way through the fourth Harry Potter book, I'm just beginning Return of the King, and I read this.  That is a LOT of fantasy for someone who reads maybe five fantasy books a year, ordinarily.  (Okay, last year I read eight.  All year.)

The cabin looked as warm as a handwritten love letter, with a stone fireplace that took up an entire wall and a forest of candles dangling from the ceiling (p. 33).

If This was a Movie, I Would Rate It:  PG-16 for endless sexual innuendo and make-out scenes, though no one actually had sex.  Once again, there were scenes involving lots of blood, and some of them were pretty violent.  The language was about on par with the other two books -- nothing you wouldn't hear in a PG-13 movie, but definitely words here I don't say.