"Land of Hills and Valleys" by Elisabeth Grace Foley 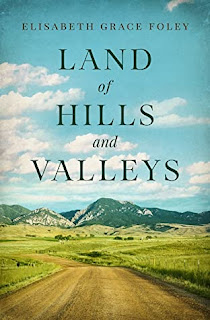 I have read quite a few of Foley's books over the last ten years or so, and I think she has truly come into her own with this book.  It has a seemingly effortless flow that only comes with a great deal of work.  In fact, it swept me off to Wyoming with such ease I'm still a little breathless.

In the midst of the Great Depression, Lena Campbell inherits a ranch when her grandfather dies.  She never met him, she never visited his ranch, and she's not even sure he was aware she existed because her mother and father were estranged from him.  And they're dead too.  But she decides to go see the ranch for herself before she decides to just sell it.

Once Lena reaches the ranch, she finds she can't leave.  Although she knows nothing about ranching, she's eager to learn.  Her grandfather's foreman Ray Harper is willing to teach her, and the other hands get along with their new boss well too.  So you'd think this would just be a jolly book about getting used to life on a Wyoming ranch in the 1930s.  But.

But her grandfather died from a gunshot wound in the back.  Some of her neighbors are friendly, and some are downright antagonistic.  It's hard for Lena to tell who to trust.

And then she falls in love.

And then someone sneaks around in her house at night.

And then there's a murder trial.

And then things get even more tense.

This isn't quite a suspense novel, but it has a LOT of tension.  I raced through the last half of the book.  Wonderful stuff.  Like I said, I think Foley has come into her own with this novel.  It has a maturity and a power that I was not expecting, and now I can't wait to see what she writes next.

Barely twenty-four hours had passed, with a whirl of enough events and emotions to fill a week, and here I was sitting and rearranging the scattered pieces of my life again.  I could only hope that eventually they would fall back into the same pattern that I had come to love and didn't want to lose (p. 139).

If This was a Movie, I Would Rate It: PG for some non-gory violence, brief strong language, suspenseful moments, and people in peril.

This is my 25th book read off my TBR shelves for #TheUnreadShelfProject2021.