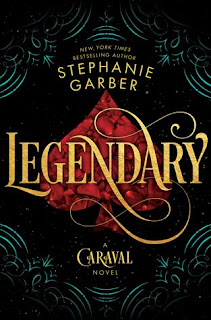 I almost never like the middle story in trilogies.  Like, basically never.  It's almost invariably my least-favorite part of a trilogy.  And Legendary is no exception.

I do think this book suffered because I loved Caraval so much (gushy review here), and then I dived straight into this book after finishing that one... only to stop reading after a few chapters because I just... wasn't loving this book.  And then I'd started it again, only to set it aside again.

Or, to put it another way, what I wanted was a new adventure in the same setting, and what I got was the same adventure in a new setting.  Sigh.

Also, to be fair, part of the reason I didn't love this is that it was focused on Tella, aka possibly my least-favorite character from Caraval.  Pretty sure everyone who read my review of that, where I said she irked me, was either like, "Hahaha, wait until she reads Legendary -- she'll change her mind!" or else "Ummmm, so... yeah... Legendary will be an interesting ride for her."  Alas, the latter were correct.  I don't dislike Tella as much as I did in the first book, but I still don't really like her much.  I especially disliked how she kept lying to Scarlett and keeping big secrets from her that were as much about her as about Tella.  Unfair.

Now, you'd think I'd have liked that the other major character in this was Dante, who was possibly my favorite character in the last one.  Unfortunately, when you take the Mysterious Man in the Shadows and bring him out into the forefront of the story... sometimes the mystery and shadows were the best part of him, and the limelight washes him out.

But I'm still invested enough to want to read Finale.  And often, the third book in a trilogy is my favorite, so you never know, I might love that one too.  We shall see!  I did still really like Garber's writing style, so it was an enjoyable read in that regard.

If This was a Movie, I Would Rate It: PG-16 for more sexual innuendo and make-out scenes, plus some non-violent icky parts involving lots of blood going everywhere.  Again, the language was fairly clean, but not squeaky.