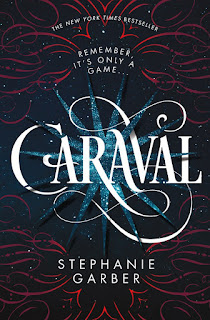 Um.  Wow.  So, yeah.  I binge-read Caraval.  Four hundred pages in two days.  While also teaching my kids, cooking meals, etc.  I can't remember the last time I read a new-to-me straight-up fantasy book that I liked this much.  Probably, The Graveyard Book by Neil Gaiman was the last time I just fell into a fantasy world and didn't want to come out.
(MILD SPOILERS follow, basically just about whether or not some characters survive to the end of the book.)

As usual, it wasn't the fantasy world that grabbed me, it was the characters.  Write a story with a protective older sister who would literally die to save her younger sibling if she had to, and I will be interested.  Make that older sister naïve, helpful, stubborn, and cautious, on top of being protective, and I'm just going to be a total fan.  I am. Which is why I loved Scarlett from basically chapter two.  Which is why I inhaled this book, because I had to know she was going to be okay.  I mean, I figured she would be okay in the end, but I had to KNOW.

The other characters... hmm.  I kept wanting to like Julian, but not trusting him enough to actually like him, but still really wanting to like him.  He kept reminding me of Loki in the MCU, and that is exactly the way I feel about Loki 99% of the time, so yeah.  He could grow on me, maybe.  Scarlett's sister Donatella... irked me a lot.  She also reminded me of Loki in some ways.  Like, she knew her older sister loved her and would do anything for her, but she also just kept doing things that would freak her sister out, and I got frustrated.

But then there was Dante.  Depending on how Dante plays into the next two books, I could become a Dante fan.  Black-clad man of mystery with suspicious intentions lurking around the edges of the story?  Ohhhhh, yeah.  I could fall for that guy.  We shall see.

We definitely shall see, because I got books 2 and 3 from the library when I was only halfway through this one.  My kids and I finished their school year yesterday, so I am absolutely going to just inhale those two books too, to kick off my summer break.  And I can't wait.

So, what this book is actually about, if you're one of the tiny number of people on the planet who, like me, hadn't already read this trilogy, is a pair of sisters with a horrifying, abusive father who escape their island nation with a pirate named Julian, bound for this magical mystery circus place called Caraval.  And then Donatella gets kidnapped, and Scarlett has only a few days to find her, and she can't actually trust anyone in Caraval because everything is a game and an illusion, and the whole thing slides very, very sideways.

Through the whole book, I kept being reminded of some vague something that it felt similar to.  Especially at the end.  It wasn't until this morning that I realized what that something is:  it's "Shore Leave," one of my favorite episodes of Classic Star Trek!!!  This was like "Shore Leave" crossed with Buffy the Vampire Slayer, so no wonder I dug it.

I really liked a lot of the writing.  Some of it was a bit... rushed... but it's also a fast-paced adventure story, so me wishing it would slow down a little here and there may have been simply fall-out from me reading a lot of Jane Austen and J. R. R. Tolkien lately.  Garber had so many amazing turns of phrase and unexpected little descriptions that it reminded me a teeny bit of Raymond Chandler now and then.  Just a teeny bit.  Just here and there.  But I liked that too.

Now, there's a lot of suggestive content -- I should probably mention that.  People touching and kissing and almost kissing and pressing against each other.  I think maybe it would have been nice if Julian's torso hadn't been described quite so often as being "row after row of smooth, brown muscles."  (That's not a direct quote, but pretty close.)  I got that he's tan and muscly and lean the first time, thanks.  But... it's YA, and I wasn't that annoyed by it.  Nobody actually ends up having sex, but there's a scene where Scarlett definitely was about to be bedded by someone, except she found a way out of it, so... yeah.  Most of it is just people making unspecified suggestive remarks, looking other people over in sexy ways, and so on.  It never crossed the line out of my comfort zone, but I wouldn't let my kids read this until they were at least 16.  Just throwing that out there.

If This Was a Movie, I Would Rate It: PG-16 for the above-mentioned suggestive content, cruelty, and bloody violence.  Not actually gory, but there were sections with a lot of blood going everywhere.  I think there was also a sprinkling of bad language, but nothing major.