"The Old Man and the Sea" by Ernest Hemingway

I first read this between my freshmen and sophomore years of college.  I read it directly after The Sun Also Rises, which had entranced me.  In comparison, The Old Man and the Sea disappointed me.  Especially since it is so very famous -- I expected it to be amazing, earth-shattering, life-altering.  And it wasn't.  My expectations for it were so high, after spending so many years reading about how influential and game-changing this story is, that finding out it's a slender, slippery, almost ephemeral story... I felt kind of cheated the first time I read it.  (Basically the same thing happened the first time I read Fitzgerald's The Great Gatsby.  Expectations are not always a good thing.  For me, anyway.)

So I decided I disliked The Old Man and the Sea.  I didn't stop liking Hemingway, and I've read a lot of his novels and short stories since then.  I love his memoir, A Moveable Feast.  But I was firmly convinced TOMATS was overrated and dull.  I never intended to read it again.

But then it kept coming up on blogs I read.  I would mention I like Hemingway, someone would say, "Ugh, I can't stand Hemingway."  I'd ask what they'd read by him, and most of the time, the answer was, "Just The Old Man and the Sea."  So I'd say, "Yeah, I hated that too.  Try something else!  He's not all like that."  But I started to wonder... would I still hate it?  Now that I've read more of Hemingway's works than one novel?  Now that I knew what to expect from it?  Or was it still not to my taste?

And that's why I'm holding this read-along.  To explore what made this story so influential, why so many people dislike it, and to discover whether or not I still dislike it myself.

To my surprise, I rather enjoyed it.  It's not my favorite book, by any means, but this time around, I found it poignant and uplifting.  A lot of people think Hemingway is depressing, and some of his books do end on a down note (for instance, my two least-favorite of his novels, A Farewell to Arms and For Whom the Bell Tolls), but I think TOMATS ended positively.  Although the old man lost the fish's meat and thus couldn't sell it, he still had the evidence of its skeleton to show everyone what a big fish he had single-handedly caught.  And he had the personal satisfaction of being defeated only by sharks, never by his prey or is own self.

For me, the book revolves around the idea of endurance.  The old man, Santiago, endures so much on a daily basis that would drive me nuts!  Hunger, cold, mockery, defeat... and that's before he hooks the biggest fish he's ever seen and endures pain and thirst and cold and shark attacks.  Who can endure the most, him or the fish?  Obviously, it's him -- he outlasts the fish, plain and simple.  At the end, the boy named Manolin tells him, "You must get well fast for there is much that I can learn and you can teach me everything.  How much did you suffer?" (p. 126).  I think that's very telling -- that he mentions learning and suffering in the same breath.  He must learn to endure suffering, and the old man knows how to endure absolutely anything.

Do I think this story is an allegory?  No, I don't.  Mostly because Hemingway said over and over that it wasn't, but also because of something J.R.R. Tolkien says in his introduction to The Fellowship of the Ring:


"I think that many confuse applicability with allegory, but the one resides in the freedom of the reader, and the other in the purposed domination of the author."

You can apply this story to so very many people and situations that, for me anyway, the idea of it as an allegory doesn't work.  For me, anyway.  Are there symbols here?  Sure.  The old man is anyone struggling to do or create or perform something difficult.  The fish is the end product they're struggling toward.  The struggle is, well, their struggle.  The sharks are the opposition that can destroy someone's work or creation.

Or, as Hemingway said, the old man is just an old man and the fish is just a fish -- you can read it as a straight story of a stubborn, sturdy old man, and it's totally enjoyable that way too.

As for the writing style here, it's a bit different from his other works, but not vastly.  In a letter to Charles Scribner in 1951, he said of this story, "This is the prose that I have been working for all my life that should read easily and simply and seem short and yet have all the dimensions of the visible world and the world of a man's spirit."*  I think it's a bit more studied than his other novels -- there are very few contractions, and the sentences are very simple and straight-forward, for the most part.  I think it works really well because the old man himself is a simple and straight-forward character, and since the story is told from his point of view, the style serves to reinforce the character.  Is it my favorite writing style?  No.  I like his writing much better in A Moveable Feast and By-Line: Ernest Hemingway, but I think it serves his purposes well here.  I did wish he had used a few more commas, though.

The sail was patched with flour sacks and, furled, it looked like flag of permanent defeat (p. 9).

Everything about him was old except his eyes and they were the same color as the sea and were cheerful and undefeated (p. 10).

He took all his pain and what was left of his strength and his long gone pride and he put it against the fish's agony and the fish came over onto his side and swam gently on his side, his bill almost touching the planking of the skiff and started to pass the boat, long, deep, wide, silver and barred with purple and interminable in the water (p. 93).

If This was a Movie, I Would Rate It:  G.  One of the cleanest Hemingway stories I've ever read.

This is my thirteenth book read and reviewed for The Classics Club.  It is also my entry for my The Old Man and the Sea read-along, which you can join here.

*I found this quote in an awesome book called Ernest Hemingway On Writing by Larry W. Phillips.
Posted by Hamlette (Rachel) at 7:09 PM

I've put my comments on moderation at this time to thwart evil. If your comment isn't evil, I shan't thwart it! 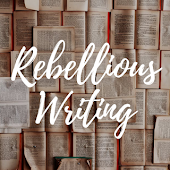 Yearning for more clean YA books? Join the movement!