"On These Black Sands" by Vanessa Rasanen 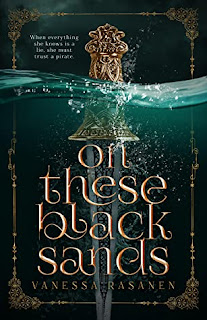 This book is SUCH a fun time!  I was a little bit hesitant about it because I kept reading reviews that said "this book destroyed me," and I honestly am not particularly a fan of books that leave me feeling destroyed.  As you may have gathered from my recent rant about Summer by Edith Wharton.  However, happily, On These Black Sands did NOT destroy me.  It did leave me reeeeeeally wanting more, but I know Vanessa Rasanen is working on book two already, so I will be patient :-D  I am confident it will be worth it.

So.  This is about Aoife Cascade, heir to a ruling body of women who make all the rules for their island, rules that are enforced by pirates who work with them.  Their island is relentlessly peaceful, and all pirate visitors must remain peaceful while ashore.  This sounds like a wonderful place to live, but Aoife (pronounced EE-fuh -- it's a real Irish name) discovers inadvertently that there's a dark side to the island.  She somewhat reluctantly joins forces with Captain Declan McCallagh, a handsome pirate captain that my mind insisted be played by Errol Flynn, which I did not mind in the slightest.  Together, Aoife and Declan (and Declan's best buddy Tommy) start learning more secrets and uncovering plots and engaging in acts of derring-do now and then... and, obviously, romance also ensues between Aoife and one of the pirates, but I'm not going to spoil things and tell you who because I'm mean that way.

One of my favorite things about this book is how Aoife never quite knows what she should do.  She's an adult, but she's not great at things like quick decisions or understanding people, and that was very relatable for me.  Also, she suffers from panic attacks, and I was really interested in seeing how those can affect a person, and also how other characters respond to them in both good and bad ways.  I think it's important to help people like me, who haven't endured a panic attack, to understand how that feels and how to help cope with them.  And what doesn't help.

While there is some magic involved in the plot, it's really fairly minimal, though I expect things will get more magical in book two.  So while this is technically pirate-fantasy, it's heavy on the pirate and light on the fantasy.

He cursed silently at the memories that dared to defy him, swimming to the surface without permission (p. 27).

He was right.  Of course he was right, but there was a difference between knowing something logically and actually believing it (p. 252).

Was this what love felt like?  A confusing yet thrilling, tangled web of emotions and sensations? (p. 354).

Creeping ivy obscured the gray stone walls, covering the windows and stretching out like spindly fingers eager to squeeze the life out of anyone who entered (p. 360).

If This was a Movie, I Would Rate It: PG-13 for a lot of innuendo and suggestive dialog (no love scenes), intermittent cussing (no F-bombs), and pirate violence (nothing graphic).

This has been my 38th book read off my TBR shelves for #TheUnreadShelfProject2021. 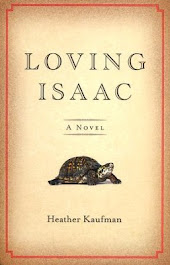