"The Canary Trainer" by Nicholas Meyer 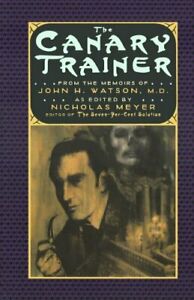 Well, what Holmesian wouldn't want to read a version of it where that's really Holmes?

So, I was excited to learn that Nicholas Meyer had written a book that mashed the two together.  I've long been a fan of Meyer's book The Seven-Per-Cent Solution and hoped he would do the story justice.  And, for the most part, he did.  Holmes was very Holmes-esque, I like that Irene Adler got to play a part that didn't involve her trying to seduce Holmes (because I'm tired of pastiches that use her that way), and I liked seeing the events of The Phantom of the Opera from a different perspective.

But Holmes isn't the Rat Catcher.  In fact, the Rat Catcher never shows up at all.  I mean, I guess you could say Holmes kind of steps in to take his place in a way?  But... it wasn't how I was hoping, so... I will have to reread this sometime without my expectations in the way, and I think I will be even more pleased with it then.  Which doesn't mean I didn't like it now, because I did!  A lot.  Enough to keep it on my shelves.

It is often so with human nature; we take for granted and disparage our greatest gifts and years to be accepted in capacities for which others might be better suited.  Clowns long to enact Hamlet, doctors to write novels, and in my case here was a detective determined to play the violin (p. 46).

If This was a Movie, I Would Rate It: PG for some mild innuendo, peril to many characters, and several fairly creepy scenes, as befits anything about the Phantom of the Opera.

This is my 17th book read from my TBR shelves for #TheUnreadShelfProject2021.

"Harry Potter and the Goblet of Fire" by J. K. Rowling