"Tales of the Black Widowers" by Isaac Asimov 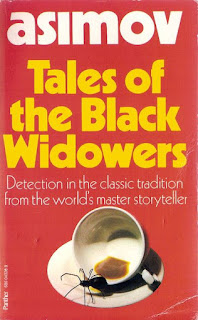 My father-in-law recommended Isaac Asimov's mysteries starring the Black Widowers to me because he knows I like mysteries and he considers these some of the best.

Please note that my copy of this book had a much bigger picture of a spider on the cover and I had to cover it with a sticky note so I could read it in comfort.  Ugh.  I wish I would have had this much smaller spider picture, though I probably would have put a sticky note over it too.

Annnnnyway, this was a pretty entertaining collection of stories.  The Black Widowers are a bunch of men in and around NYC who get together once a month to have dinner in a restaurant's private room, no women allowed.  One month, one of them tells the others about a mystery they can't solve.  Their waiter, Henry, solves it.  Next month, same thing.  Every month, one of them presents a problem or puzzle or mystery, and Henry the waiter inevitably solves it.  It's a cute premise for a short story series.  And some of the mysteries were quite clever.

But I figured out a third of them before they ended, and I'm always a bit dissatisfied if I figure out a mystery before the reveal.  It feels like I've been cheated, somehow.  You see, I don't TRY to figure it out.  But if the answer is there, jumping out at me, well, then I feel like the author could have done better, I'm afraid.

Also, I didn't really like most of the characters.  Many of them were rude or unkind to each other, and the only one I liked much was Henry.  But we never got to know Henry at all, he's always in the background, and so I couldn't connect with him, even though I would have liked to.  I can see why f-i-l likes these, as they're very cerebral little puzzles, but I need more than that from a mystery to make me like it enough to want to read more in the series.  So I'm going to see if he wants my copy of this and one of the follow-up volumes that I also had picked up at a used book store at some point.

And that means I got TWO books off my unread shelves by reading one!  This is my 43rd book read for #TheUnreadShelfProject2020, huzzah.

If This was a Movie, I Would Rate It: PG for some mild curse words and mild innuendo in dialog, and for some discussions of crimes, including murder.