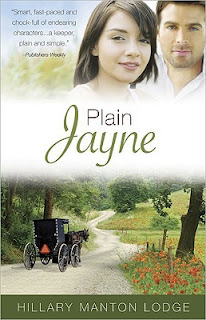 I have never really read much "Amish fiction," though I remember when it was the hottest thing in Christian fiction.  But Hillary Manton Lodge has become an auto-buy author for me, and that means not only that I will buy her next book whenever it drops, but that I want to read her earlier works too, like Plain Jayne and its follow-up, Simply Sara.  I was able to find copies of both of them recently, which made me so happy.

Jayne Tate is a motorcycle-riding, alt-rock-listening, story-chasing journalist.  But after her estranged father dies, her writing suffers, and so her editor makes her take time off to regroup.  Rather than go hiking or take a lot of naps or take up gardening, Jayne decides to go hang out with Amish people so she can write a newspaper or magazine article about them to sell freelance.  Which is kind of a nosy and aren't-I-superior-to-you attitude to have, but of course, she soon learns that there's a lot more to Amish life than horses and quilts and waking up extremely early in the morning.

Jayne meets a formerly Amish carpenter named Levi who interests her immediately, even though she has a boyfriend back in the city.  Levi's family allows her to live with them and write about them, even though they have nothing to do with Levi anymore because he left the Amish faith and became a Protestant.  Over the course of the book, Jayne makes steps to reconcile with her estranged mother and sister, learns how to bake pie, and reevaluates her own faith.

I think my favorite part of this book is that Jayne realizes that a simple, Amish life is not for everyone.  She learns how to focus and how to prioritize, but she also understands that you can serve the Lord from a modern life that uses electricity just as well from an old-fashioned one.  Although I've really never read any other Amish Christian fiction, I have gathered from reviews and such that generally such books have an opposite conclusion, which I don't find to be healthy.  After all, Godliness with contentment is great gain -- which means being contented with the life you've been given, not trying to conform to someone else's life.

Some people might question the consumption of ice cream in fifty-degree weather, and that's their prerogative.  I'm just not one of them (p. 107).

Living in a small town was like being followed by a Greek chorus who lamented your latest mishap (p. 150).

If This was a Movie, I Would Rate It: PG-13 for some discussions of whether or not an unmarried couple will spend the night in bed together.  (Spoiler alert: they don't.)

This is my 33rd book read off my TBR shelves for #TheUnreadShelfProject2021.