"The Moonstone" by Wilkie Collins 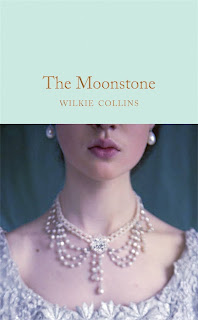 I tried to read The Moonstone a couple of years ago, and just couldn't get into it.  Don't know why.  Wasn't in the right mood, maybe?  Still, I knew I wanted to read it, since it's widely hailed as one of the first great mystery novels.  I got this lovely copy with a gift card, and it sat on my TBR shelves for months and months because I was hesitant to try it again, if you must know.

But some friends on Bookstagram decided they wanted to do a very laid-back read-along of it, just reading it at our own pace in the month of January, and I decided it was time for me to tackle it again.  I read it in a little over a week, all 673 pages of it.  (These editions are pretty small, so the pages add up fast.)

Parts of this book made me laugh aloud, especially in the first third or so, which is narrated by a snarky, observant old servant named Betteredge.  His asides made me think of Jane Austen because of their wry satirical wit.  And his obsession with Robinson Crusoe was always funny.

Parts of this book made me wish they would be over quickly, especially the section narrated by Miss Clack, who was a pharisaical, puritanical busybody.

The plot revolved around a giant diamond looted from India and later given to a young lady on her 18th birthday.  And then it promptly gets stolen.  Collins spins the mystery out for what feels like forever, but he does finally resolve it.  For a while there, I thought he was going to just end it with us never knowing what happened to it, and if that had happened, I would have thrown my book across the room.

I'm not sure how this book managed to simultaneously feel as if it was dragging on far longer than necessary, and yet kept up a galloping sense of suspense.  I kept saying, "Why isn't this book over yet?" and "I have to know what happens next!" at the same time.  That's a rather odd mix, I have to say.

I really haven't figured out yet if I actually liked this book or not.  I definitely want to read more by Wilkie Collins, though.

The more money he had, the more he wanted; there was a hole in Mr. Franklin's pocket that nothing would sew up (p. 35).

We had our breakfasts -- whatever happens in a house, robbery or murder, it doesn't matter, you must have your breakfast (p. 128).

If This was a Movie, I Would Rate It: PG.  Lots of suspense, some mild violence (people getting tied up, that sort of thing), and mention of a man having a mistress. 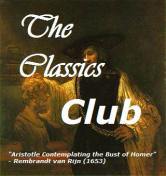 This is my 13th book read for my 3rd Classics Club list and my first for #TheUnreadShelfProject2021.