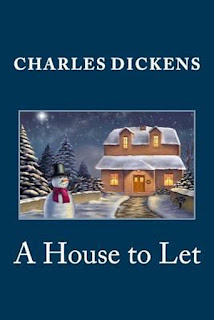 Well, this was an interesting premise for a novella, anyway.  Charles Dickens and his writer friends Wilkie Collins, Elizabeth Gaskell, and Adelaide Anne Proctor all got together to write a book in several pieces that got stitched together later with a narrative framework.

It begins with "Over the Way," co-authored by Dickens and Collins, which tells of an elderly woman who moves to London and becomes fascinated by the house across the street from her new home.  It's up for rent, or "to let," and she thinks it contains a mystery, so she asks her butler and an old friend to both find out the history of the house.

Elizabeth Gaskell picks up the story with "The Manchester Marriage," which is part of the house's history, all about a widow who remarries a kind man, but inadvertently causes heartache.

Charles Dickens adds to the house's history with "Going into Society," about sideshow performers who turned the house into an attraction for a time (think The Greatest Showman).  One of them tries buying his way into society, but discovers that society only wanted to be friends with his money, not him.

Adelaide Anne Proctor continues the list of unhappy happenings with a series of narrative poems called "Three Evenings in the House" about a woman who continually gives up her own chances at happiness to help her brother.

Proctor's other contribution, "Trottle's Report," brings in the current history of the house and the mysterious goings on there.  Another tragedy is in the works, but perhaps it can be averted!

Dickens and Collins end the whole story together with "Let at Last," which does at least have a happy ending, so the whole thing ends on a good note.

Having different authors for the different bits gives them the flavor of being stories told to the characters by very different people, which worked very well for this sort of story -- better than I expected it to, in fact!  I liked "Going into Society" best, I think, because it didn't end totally sadly, but more in a realistically melancholy sort of way.

If This was a Movie, I Would Rate It: PG for some sadness, deaths, and child abuse of the sort you commonly find in Dickens.

Several of the stories-within-the-story take place around Christmas, as does the main narrative that frames them, so this is technically a Christmas story, and thus it is my 2nd book read for the Literary Christmas reading link-up hosted by In the Bookcase.  It's also the 11th for my 3rd Classics Club list and my 49th for #TheUnreadShelfProject2020.