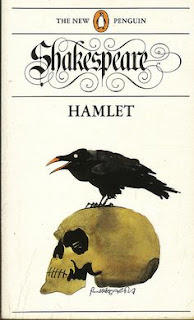 Claudius and Hamlet confront each other at last, verbally circling each other like wolves or knife-fighters, each looking for an opportunity to strike.  Claudius keeps asking where Polonius' body is, and Hamlet keeps making mocking or cryptic answers.

Since Hamlet has been attending the University of Wittenburg, we can assume that his line "Your worm is your only emperor for diet" (20-21) probably refers obliquely to the famed Diet of Worms in 1521, where Martin Luther (who taught at Wittenburg University) and a bunch of Roman Catholic officials argued over the idea of transubstantiation during Holy Communion.  ("Diet" in that case meant "meeting," and Worms is a city in Germany, pronounced Vorms.)  I like this little nod to his life as a student, a life we know so little about.

And then comes one of my favorite passages, when Hamlet basically tells Claudius to go to Hell, only in a far subtler and funnier way.  He says Polonius is "[i]n Heaven.  Send thither to see.  If your messenger find him not there, seek him i' th' other place yourself" (32-33).  Zing!

Here's a clip from the 2000 movie starring Ethan Hawke as Hamlet and Kyle MacLachlan as Claudius -- it's very menacing, and more violent than the scene usually gets played, which really brings home the seriousness of the situation, I think.

And when everyone else leaves, we get a tiny soliloquy from Claudius about his plan to have the king of England kill Hamlet.  Bad, naughty, evil Claudius :-(

Why is Claudius getting other people to kill Hamlet for him instead of just poisoning him like he did King Hamlet?
Posted by Hamlette (Rachel) at 6:57 AM